A story of a man, a car and amazing coincidences!

First up may I please extend thanks to Dave Davis for helping me with an intermittent carby problem at All British Day. Am now on the lookout for ColourTune! For 29 years I was very fortunate to have been the proud owner of 2 x Austin 1800 sedans. My first car in Australia was a 1968 Mk1 with the registration plate EWE-452, (funny having come from NZ!). I was a drummer in a band at the time and was amazed that I could fit not only the whole kit but our entire PA system and 3 of the guys and their guitars and amps as well!

My second car was a 1970 Mk2 which I got from Gary Fry, who had quite a collection at the time somewhere around the Eastern Suburbs. It was in better condition than the Mk-1 so between them I always had a working car.

In February 2015 I was extremely fortunate to find Ronald, a 1970 Mk-2 Utility that appeared on an email to the 1800 GoogleGroup forum. Thinking there were very few of these around and that it could be anywhere in Australia, I wasn't hopeful but phoned up anyway to find out about it. To my surprise it was in Sydney! 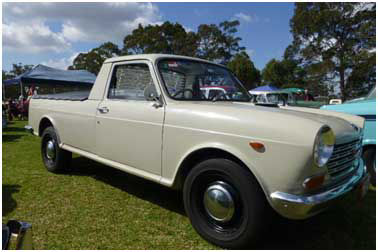 Response to the next obvious question was met with a gasp… it was actually in my suburb, Turramurra! Things became even crazier when Hugh (the owner) told me the address- it was literally around the corner! I walked over to his house to see it that night. Now it gets even more surreal.. Hugh's mum Anne is writing out a receipt for me, and on asking for my address her eyes lit up and she said "we used to live there". They had been there In the early 1970's in the original timber house that was on the block. Hugh and I flat-towed Ronald over behind my Astra in the dead of night (we could have just pushed it if we were fit enough!). They didn't have a driveway so the mission first involved me sneaking over and removing some council bollards from an adjacent grass accessway (and putting them back after!). The next day Hugh's Mum Anne came over too and pointed out some original features of our place including trees she had planted all those years ago.

So I like to think that Ronald has come home!

He was actually owned by Hugh's Grandfather Dudley Moore (true!) and was last registered in Queensland (Tallebudgera) in 2005 with plates 204-DOU. After 18 months of work and mostly mechanical only restoration which Hugh kindly helped me with, Ronald passed a blue slip and was on full registration. Ronald is an absolute joy to drive (sometimes even to just sit in when I need to escape from the family!) I still pinch myself over some of these amazing coincidences!